It is essential to have pet rabbits vaccinated against both Myxomatosis and Viral Haemorrrhagic Disease (VHD).

Both viruses are lethal to rabbits with recovery from either virus in rabbits being very rare.

Rabbits need to be vaccinated against both diseases BEFORE coming into contact with the virus's, in order to build up enough antibodies for immunity. 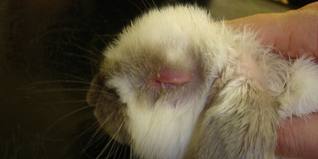 The above photograph is typical of a rabbit with the disease

Myxomatosis, a man made virus, was first released into the wild in the 1950s, to reduce rabbit populations throughout various countries.

The first symptoms are usually a discharge from the eyes and swelling around the head, ears and sometimes genitals.

Within a day or two the eyes may become swollen shut. The swelling makes eating, drinking and breathing difficult and lumps or nodules may also develop.

Further infections such as pastrella (snuffles) are common. Death can occur within a few days to a week or so. Rabbits that recover, which is very rare, may take weeks or even months to do so fully.

Originally recognized in Uruguay in 1896, the virus was of little note until 1950/51, when it spread through the wild rabbit populations of South East Australia, with devastating effect on rabbit numbers.

In 1952, it was then introduced into France, followed by greater Europe and further afield.

In the UK, a new law was passed in 1954 making it illegal to introduce an infected rabbit into a colony of other rabbits.

The virus spread by direct contact between rabbits or, depending on where you live in the world, by insects, particularly mosquitoes, mites, ticks, fleas and lice etc.

Since the virus is also spread by insects, ticks and fleas, Vaccination is essential for all rabbits including those kept indoors.

Fluids from an infected rabbit are transferred
by way of an eye, nose or lesions discharge and the virus is very easily contracted by other rabbits.

Rabbits can be vaccinated from 6 weeks, although the vaccination should not be carried out on ill or pregnant rabbits.

If you also keep cats, dogs or other pets as well as a rabbit, then it is important to make sure the other pets are treated for fleas and ticks etc.

Where other pets are kept and there is an outbreak of fleas, you would also need to treat the house and carpets etc.