The British and American Polish rabbit are different from each other.

The British Polish is the original rabbit, in which The American Polish has its roots, and was developed from mixed breeds of small wild rabbits, crossed with the Albino Dutch and Silvers.

The Polish rabbit is believed to have originated in England during the mid to late 19th century with the first known entries of display being 1884 in Hull, Yorkshire, England.

This rabbit breed is named after the "Polish" appearance of their shiny coat and not because they originated from Poland, which they don't.

Although a small sized rabbit, the Polish were bred for food and considered a delicacy.

Commonly referred to as 'hutch rabbits', they were imported to USA in 1912. Breeders wanting to improve their "snaky" appearance, selectively bred the rabbit to a more compact body, while the Polish breed in the UK remained slender and "hare" like. 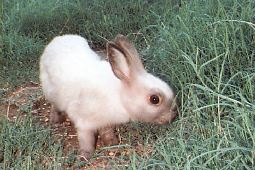 An example of the British breed of Polish

As a consequence of this breeding, the American Polish have small rabbit genes from other breeds, mixed in, such as the Netherland Dwarf.

The American Polish rabbit is also known as the "Little Aristocrat" and is a popular show and exhibition rabbit.

The Average life span is 6 to 8 years but longer if Neutered or spayed and any life expectancy is dependent on care and diet.

British Polish rabbits are very petite with a maximum weight of 2.5lbs (1.1 lbs)

The coat is smooth with short, fine hair. The coat does not need grooming on a daily basis and the breed is not prone to hairballs.

In Britain, the rabbit comes in many different colours.

In America, the colours are Black, Blue, Chocolate, white with ruby or blue eyes, and broken (referring to the coat colour).

Original imports to the USA were White, ruby eyed, and in the US only the ruby eyed, not blue eyed, is a true albino.

The American Polish was initially only bred in White with red eyes (albino). Crossing with the Beveren rabbit resulted in the white with blue-eyes variety which was recognised in 1938.

The other colours mentioned above have since been developed and recognised.

Some of the first Polish were albino forms of the Dutch rabbit.

Polish rabbits are intelligent, curious and playful. They like lots of attention and need to be occupied.

Generally calm and friendly, though more highly strung than other breeds, they are not easily domesticated, but when they are, they become loving and playful.

They do not like living in pairs, prefer solitude and will not easily accept another rabbit in the same living area.

Owing to its small size and temperament there are other breeds that would be more suitable to children.

As with any rabbit all children should have adult supervision when handling and taking care of a rabbit.