What is poisonous to rabbits? 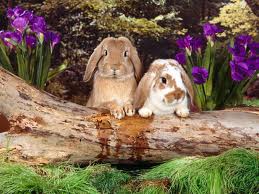 There are many common foods, plants and weeds that are poisonous to rabbits and it is helpful to identify some of these.

While we discuss here, the foods, plants or weeds to avoid, it is by no means a comprehensive list and anything not mentioned here does not mean it is not harmful to your rabbit.

Rabbits are vegetarians but they cannot eat any vegetable, plant or weed.

There are foods that are safe for humans and other animals, but will have a harmful effect on a rabbit.

Some of these foods, vegetables, plants or weeds are harmful in varying degrees, while others will result in killing a rabbit.

It is far better to identify and know the foods and plants/weeds that are safe for your rabbit to eat and then exclude every other single plant or type of food.

The golden rule, in this case, is unless you are sure DO NOT FEED. Pips of certain fruits, which contain very minute particles of cyanide, can harm a rabbit, even though they are eaten by humans with no ill effect.

Such examples are the seeds of apples and pears.

In addition, the pits of apricots, peaches and plums contain cyanide compounds.

There are minute amounts of cyanide in almonds, cassava roots, mangoes and millet sprouts, while a substance called 'Psoralens', found in Parsnips, is poisonous to rabbits.

The toxic compound called 'Persin' found in Avocado fruit, seeds, leaves and bark is harmful, even fatal, to rabbits.

In addition, the Bark and twigs of Cherry trees should be avoided.

Rhubarb contains oxalates preventing absorption of calcium and is therefore harmful, though should not be fatal, Spinach is harmful, though again, should not be fatal. Foods that may be harmful in the long term, such as mushrooms, button mushrooms, and other mushrooms from the 'agaricus bisporus' family, have been shown to cause cancer in mice. There are common garden plants that are dangerous and poisonous to rabbits.

While on the subject of potatoes, the 'eyes' of potatoes contain a toxin harmful to rabbits. On reading the above, many of you may wonder why a rabbit is eating these foods in the first place, but such feeding can come from misconceptions that rabbits are allowed to eat anything that's not meat.

If you think your rabbit has eaten something that is, or can be harmful, seek veterinary help immediately.

It may also help to take what the rabbit ate or chewed, along with you.

Rabbits will not always show ill effects immediately. In fact there may even be a day or two before a rabbit shows signs of poisoning. Therefore, if you think your rabbit ate something poisonous or harmful, still go to vet.

While on the subject of foods that humans eat, Do not feed your rabbit any of the following since these are also harmful or poisonous to rabbits.

Chocolate or foods that contain coffee and caffeine since these contain substances called methylxanthines and if ingested by rabbits, methylxanthines can cause diarrhoea, excessive thirst, urination, abnormal heart rhythm, tremors, seizures and death.

White chocolate has a lower level of methylxanthines while dark chocolate is more dangerous than milk chocolate.

Grapes & Raisins can be harmful

Bread and especially yeast dough (the danger is greater before the dough is cooked and the yeast has fully risen) cause gas to accumulate in a rabbits digestive system which can lead to GI Stasis and other problems.

Many Baked products and candy contain Xylitol, used as a sweetener and can cause an insulin release in most species, which can lead to liver failure.

Vegetables such as the Onion, garlic and Chive family can obviously cause gastrointestinal problems fatal to rabbits.

Milk-based products cause diarrhoea or other digestive problems as rabbits do not have large enough amounts of lactase, which breaks down lactose in milk.

Large amounts of salt can obviously produce excessive thirst, urination and sodium poisoning in rabbits, as is the case with most pets. There is a massively long list of garden plants and weeds that are poisonous to rabbits and when time permits we will link a separate page here with photographs of those plants/weeds.

However, even given that information, unless you are an expert botanist, it is highly unlikely you will remember and recognize most of the plants/weeds during normal activity, so for now the correct advice is to only feed what you know to be safe.