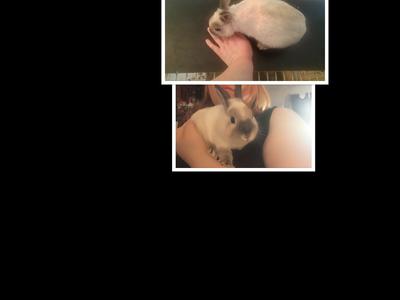 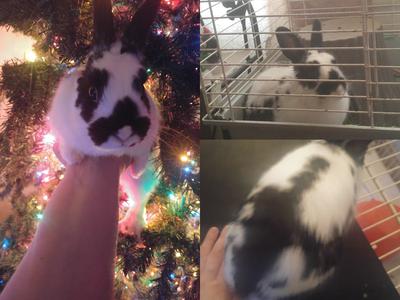 Backstory:
My hubby was scrolling a Facebook group and there was a woman who said there was a rabbit who got loose and she needed help catching it.

We both assumed it was hers or that she wanted to keep the rabbit so we offered to go help. After a few minutes, she finally gave in and let us catch her. She was under a car by the way, so when we stood up the woman who posted was gone like she just left.

Already having 2 rabbits we were reluctant to have another rabbit so we tried to find her owner for a full month posted her pics and with some research, we found out this was the second time she was "lost".
So after waiting with no one messaging us we decided to keep her over bringing her to the SPCA.

My reason was due to the fact she's a bit older and honestly if we could give her a life where she won't be afraid of being put out and she can feel loved rather than being stuck in a cage until her death or unlikely adoption so be it. With this I named her Hope to signify Hope for a better life.

So I gave her the biggest cage we had so she can get accustomed to our other animals and give her a safe zone. We tried letting her out to run in the room and the house like our others but it was overwhelming for her all she did was hide so the cage was hers. Well about a month or 2 after we got her I woke up to cute Lil babies, yes she was pregnant and We didn't know.

On the 7th of this month, they will be 11 months. Hope is back in our room and really getting out of her shell and I recently thought about it I wanna know what she and the baby's breeds are ..I don't know the father but if i know the mothers maybe it will help. Also the babys are named Oreo (black and white) Marshmallow (white and beige with a dark nose) and Peanut (White with alot of beige)

Join in and write your own page! It's easy to do. How? Simply click here to return to Rabbit Forum.