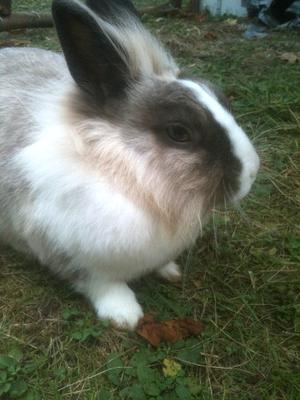 Hi
We have three dwarf rabbits, all 3 years old. Normally they all reside outside in a safe enclosure (put away securely at night). We found one of our rabbits (Churchill) with a broken leg a couple weeks ago, took her to a rabbit specialist vet and had to have her left hind leg amputated as the nerves had been severed so it wasn't possible to pin the leg.

Fast forward over 2 weeks later and she is recovering very well indoors. I have only taken her to see the other 2 rabbits once, during which they ignored her - possibly because I was told to keep her separated so she would not jump around too much with them.

She is now in her third week, stitches are out, she is no longer on medication, just antibiotic cream until the seam is completely healed. She has to stay indoors a further 2 weeks.

I told the vet I thought she was lonely (she is not normally a cuddly rabbit, but is much more so now.) I have moved my office to be in with her during the day, and I can tell she very much responds to having people about. The vet told me I could bring the other rabbits up to her, and today I did. She was not happy.

She basically attacked them, specifically the other female. To clarify, we have a male (neutered) and 2 females (not neutered*, as we have no other rabbits about). The two females are normally like any sibling sisters, lots of fun and play and sometimes some rivalry and hair pulling.

What I am trying to figure out is whether Churchill has become incredibly territorial of her new home in our living room, or whether it is a 2 girl rabbit (non-neutered) thing that has her not happy they have come to visit.

Ideally we have to return Churchill back with the others at some point, but will only do so if all is well between them.

Any thoughts or insights rabbit peoples?