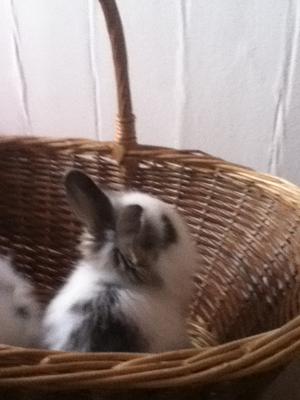 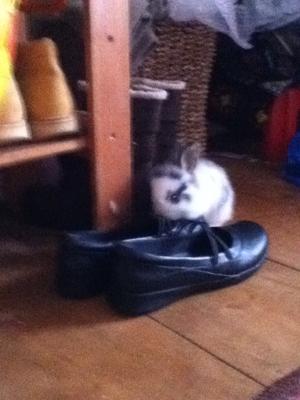 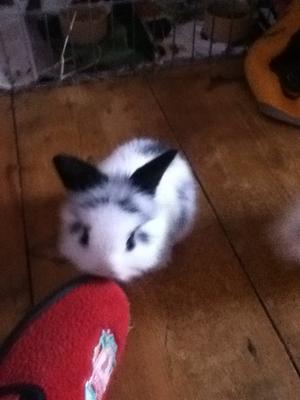 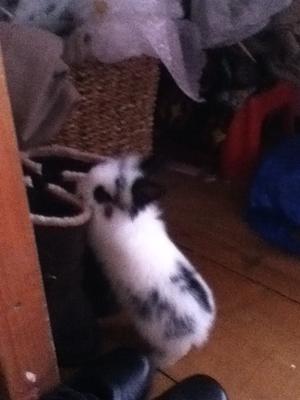 I have recently purchased two baby rabbits from a pet shop.
It was an impulse buy, which I know is not ideal. I have since researched rabbits very thoroughly and realise that they can live until their early teens (yippee).
They will be neutered as soon as the vet can do them (our vet said 5 months old for boys and 6 months for girls).
They are beautifully bonded and almost always sit side by side, touching. I first saw them in the shop laying nose to tail with their ears down, the two together being just a bit bigger than a tennis ball.
They are mainly white and a bit fluffy. They have black markings and are so so very pretty!
I have called them Snowflake and Frosty. Snowflake has the black ears and is shown next to a red slipper, Frosty is in the basket and has slightly paler markings. We think they are both girls.
They live indoors, in my bedroom, in a cage 150cm x 75 cm about 69cm high. It has a mesh shelf which I cover with newspaper and they have 2 cardboard boxes, one as a litter tray (newspaper and hay) and another on its side, for extra interest.
They love being up on the shelf. I have the base of an indoor cage (somewhat smaller) filled with torn up newspaper on my bedroom floor which they love to dig, hop, and binky (!) in.
I hope to convert the shed for them and build a run on to it. Looks like the thicker rectangular mesh will be what I use and pet safe treated timber.
If I ever get a third rabbit it would be from a rescue center. The price you pay is probably cheaper than having one neutered anyway. I do like the idea of a mini lop. Don't rabbits look great leaping and racing about?.
Can't wait to get mine out on to the grass. Will sort a tray of turfs for them soon (indoors) and some pots of rabbit safe plants to eat.
Our (beautiful) collie is VERY keen to get to them so a secure outdoor run is a must. Our Labrador (gentle and soft) is much more easy going. Will have to do some training with them to encourage them to keep away from the rabbits. I have heard that you can 'clicker' train rabbits. Does any one have experience of this?
Here are some early pictures of them. They've grown a bit since. Does anybody know why binkying is called binkying?