The English Rabbit, the proper guide 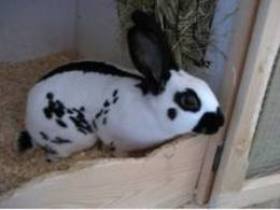 The English Rabbit is one of the oldest breeds of rabbit, dating back to the mid 19th century with some records located, as early as 1838.

This breed may also be referred to as the Old English or the English Spot.

The English rabbit is well known for its six types of distinctive body markings which are as follows;

1.The butterfly shaped mark on the nose, which as you look straight toward the rabbit, peaks in the middle with a 'wing' on both sides.

2. Its coloured ears, from base to the tips.

3. The coloured circles around the eyes.

4. The spine marking, which is herring boned and runs in a straight solid line from the base of the ears to the tip of the tail.

5. A spot on each cheek below the eyes,

and the most commonly known, 6.the chain of spots along each side of the body, running from the base of the neck to the hind legs. The English rabbit has an arched type body, long slender legs with the hind legs parallel to the body, rounded hips and vertical ears.

This is a very friendly and very lively rabbit.

They make excellent pets and are well loved for their inquisitive nature.

Owing to its active behaviour they do need space.

The life span is 5+ years, but any lifespan of a rabbit is dependent on the care and diet given. Other influencing factors can be whether the rabbit is kept indoors or outdoors. Recognised colours are Black, Blue, Chocolate, Grey and Tortoiseshell.

They are recognised in many more colours in Europe where they are known as Papillons (French for butterfly).

In the United States they are usually called English Spot, sometimes English Butterfly and here again; they are recognised in many more colours. The English rabbit was developed in the mid 19th century.

Accounts are that by selecting spotted rabbits that carried a resemblance to the Great Lorrainese (now known as Giant papillon), breeders wanted to create an attractive, fine looking rabbit, which for that time could be considered unusual, since the main objective then was to produce rabbits was for meat purposes.

The English rabbit was very popular in the 1850s and 1860s, then for a short period seemed to disappeared from public view, only to reappear in the 1880s.

Accounts suggest, they are also thought to have come from the English Butterfly and are considered to be a relative of the Checkered Giant, which weighs 10 to 14lb.

The first examples were coloured black, but the Blues, Chocolates, Greys and Tortoiseshell colours were soon bred, exhibited and recognised in Britain.

The English rabbit was imported to North America around 1910.

The French named the breed 'lapin papillon anglais' mainly because of the butterfly marking on the nose. As a point of interest, for the purpose of breeding for show purposes, the spots on the body have to match and be of certain pattern which is extremely difficult to achieve.

b) Circle around the eyes = 8 points

c) Cheek spots to be clear from eye circles (either cheek spot missing, deemed to be a serious fault) = 5 points

IDEAL: The markings on both sides of the rabbit to be equally balanced. Chain marking to commence at the base of the ears in small spots, increasing in size towards the lions.

a) Unbroken saddle, to be herring-boned and clear in any distinct colour, from base of ears to tip of tail. (definite break deemed to be a serious fault) = 10 points

e) Belly or teat spots (there should be six) = 6 points

3. Colours - Black, Blue, Chocolate, Grey, Tortoiseshell- no other colour eligible or admissible ( all colours to be solid and right) = 10 points

5. Condition - exhibits should be fit and alert with short tight coats and firm flesh = 5 points

Disqualifications = Both cheek spots touching eye circles. All exhibits with putty nose. Exhibits which in the judge's opinion are unfairly prepared for exhibition.

Among breeding circles it is recognised that if you breed two spotted bred rabbits they will produce 50% spotted babies, 25 % selfs (which are the solid colours of black, blue, Chocolate, Grey or tortoiseshell all over) babies and 25% charlies (which means white with coloured head marking, not many spots and a stripe down the back).

In order to achieve 'all spotted' babies it is required to breed a self to a charlie, although the pattern will not be up to any required standard.