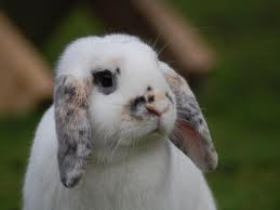 The Dwarf Lop became a very popular pet rabbit in Britain during the 1980s and 90s, having been recognised by the British Rabbit Council in 1977.

The Dwarf Lop in Britain (which is what we are talking about on this page) is referred to, as the Mini Lop in the United States.

The Mini Lop in Britain is known as the Holland Lop in the United States.

If you are still unsure, the best advice is to check on the actual breed you are interested in, in relation to the country you are in.

The fact is, the British Dwarf Lop is actually a rather smaller version of the French Lop, a popular and massive continental breed.

Holland is recognised for its miniaturisation of different breeds and the idea of producing a small version of the French Lop, was conceived and carried out in Holland.

The Dwarf Lop is a small to medium sized rabbit, with an expected fully grown weight of around 4½-5lbs (2-2.3KG). When bred as pets they may be larger than 'show' rabbits and weigh up to 6½lbs (3kg). Characteristics are a short thick set body with rounded haunches and short strong legs. They have a broad head with a rounded face and wide cheeks along with wide flat lopped ears that hang down beside the head.

The coat is of dense, soft, medium length hair which should be groomed 2 to 3 times weekly, and daily during moult.

This particular type or breed of rabbit are inclined toward dental disease, a potentially fatal condition that is often inherited. Front teeth malocclusion is common and back teeth problems develop later.

When purchasing, it is best to try and choose a rabbit with a low risk of hereditary teeth problems, from a reputable breeder or rescue centre, rather than other outlets which may not know the rabbit's family history. The rabbit is laid back, very loving and will provide a lot of affection, if cared for and looked after properly.

It is a lively and outgoing breed, unlike the rather unhurried French Lop.

They are easy to house train, good natured and are okay with being handled and picked up, if done correctly.

Females and males can be especially temperamental until neutered/spayed.

These rabbits are good with caring children but as with all pet rabbits, adult supervision should be present at all times.

The expected lifespan is 5 to 8 years, although the life expectancy of any rabbit is dependent on the care and diet given. There are many colours including; Agoutis, Black sable, Blue agouti, Butterfly (white blotches on coloured background), Fawns, Fox otter patterns, Orange, Sables, Sooty fawns and white.

They can be self coloured (solid coloured) or have patches of white on the head, chest and legs. The Dwarf Lop in Britain descends from the first dwarf lops, also known as Holland Lops, developed in the Netherlands during the 1950s.

The Dutch rabbit breeder, Adriann de Cock, is believed to have been instrumental in developing the Holland Lop.

His intention was to create a miniature French Lop, by crossing the French Lop with the Netherland Dwarf. This did not produce lop-eared rabbits but successive cross-breeding with English Lops proved more successful.

Continued selective breeding resulted in a rabbit similar to the French Lop, but much smaller and Holland Lops of around 4.5 lbs (2kg) was exhibited in 1964.

In 1968, at the Utrecht show, where the breed weighed about 4lb (1.8kg), a lot of interest was shown by British breeders.

It was felt the charm and character of this breed would make it more appealing to those that were put off, simply by the large size of the French Lop.

Holland Lops were imported to Britain in 1970 with George Scott being one of the first to import them in that year, where subsequently they were selectively bred, in the following years, to produce the smaller Dwarf Lop.

Dutch breeders continued to improve the breed and following further imports of improved Holland Lops from the Netherlands, the lower weight limit for the Dwarf breed standard was raised in 2000. Regardless of the recent rise in popularity of the Mini Lop, this breed still remains one of the most popular pet and show rabbit breeds.