Dutch rabbits are one of the more popular breed of pet rabbit.

They are easily identifiable by their unique, striking and distinctive markings and colour pattern.

They have a compact well rounded body, rounded head with short stocky ears, fairly broad at the base and short glossy fur.

A wedge of white running up the front of the face is named the 'Blaze'. The cheeks are rounded in circles of colour with the neck markings being a white wedge on the back of the head.

There is a straight line running behind the shoulders to the underneath of the rabbit, across the belly. The white fur of the collar meets the coloured fur and creates a line that forms a perfect circle around the body. This is called the 'saddle'.

The 'undercut' refers to the under portion of the body and is a continuation of the 'saddle'.

Reference to the 'stops', are the white spats/markings on the back feet starting from the toes for about one and a quarter inches (3.2cm) along the length of the foot. 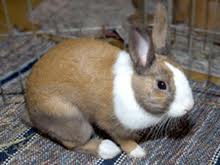 This photograph clearly shows the 'stops' on the back feet.

As is the case with all rabbits, they require attention as they can become bored easily.

This rabbit makes an excellent pet and can be easily trained. The more they are handled, the tamer they will become.

They are suitable as a pet for children over 10 years but any child should have constant adult supervision when dealing with the rabbit.

The expected life span is from 5 to 8 years.

The average lifespan is 6 years, they can live up to 10+ years, but the age of any rabbit is dependent on the care and, just as importantly, the diet.

Neutering or spaying will positively lengthen the rabbit's life span.

As well as being a popular pet they are also very popular among show breeders. The common colour is black and white but other colours include;

The six colours recognised for shows in the US are Black, Blue, Chocolate, Grey, Steel, Tortoise. In the UK, Yellow and Pale Grey are also recognised.

The classic markings make the Dutch rabbit the aristocrat of all show rabbits, distinguishing it apart from any other breed.

The Dutch rabbit, although originated in Holland, was actually developed in England.

In the early to mid nineteenth century, rabbits were imported to England from the continent, for the meat market and fur trade.

Its roots are in a breed from that period called the Petite Brabancon.

The Petite Brabancon displayed Dutch markings and breeders in England selected the ones with even markings, thus developing into the Dutch rabbit breed.

The Dutch rabbit originated near the birthplace of the

Netherland Dwarf. In Holland this breed is called the Hollander rabbit.